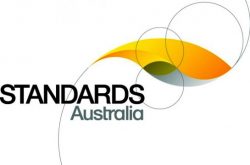 Many people may be aware of Tables 3, 4 & 5 of Standards Australia & CSIRO Handbook HB 197 which provides minimum slip resistance classifications for specific locations.  There is much more information and detail that must be considered beyond simply extracting the classifications from the tables. Additionally, existing surfaces that do not meet the recommendations of HB 197 may not necessarily be unsafe, a risk assessment and possible control measures should be evaluated by a qualified expert.

In the years following the publication of HB197, many designers and operators took the view that this was an optional guideline (not a standard) and that compliance was a choice.  Insurers quickly disagreed when courts were awarding significant payments to claimants in slip cases and in general settled claims where a design did not meet the minimum recommendations of this Handbook.

Handbook 197 was intended as an interim publication and the recommendations contained within were intended to be MINIMUMS. Those who believed that a complying selection would prevent any problems often found out the expensive way after a series of problems with products in service. Handbook users who simply designed by skimming the tables found in the Handbook, often made incorrect assumptions.  Perhaps the most common was because the tables often recommended results by more than one test method, for example:

Table 3 lists both Ramp (R ratings) and Pendulum (Z, Y, V ratings).  For a building entry foyer this table recommend an R10 ramp and/or an X pendulum. Some users therefore determined incorrectly that an R10 was equivalent to an X.  In fact there is no direct correlation between Ramp / Pendulum or other test method results.

HB198 published in 2014 does not replace HB197, however there is some additional information and some clarification of some of the most questioned and criticised aspects of the original handbook. Most notable aspects of HB198 are:-

SA HB 198:2014 Handbook Guide to the specification and testing of slip resistance of pedestrian surfaces

Table 3B provides guidance for pedestrian surfaces for particular applications. The values represent a consensus view of Committee BD-094, although not all experts agree on all values. The values in Table 3B have been determined by the following process:

For completeness, Table 3A is also reproduced here.

There are some fundamental differences in the purpose and nature of Tables 3A and 3B.

Table 3A applications and values have been determined by the Australian Building Codes Board for use in regulations based on the NCC. It provides the minimum wet pendulum test or oil-wet inclining platform test classifications that are deemed-to-satisfy specific applications in buildings covered by the NCC. These values may be used as acceptance criteria in a range of situations, including those where the building incorporates only the minimum regulated NCC requirements for handrails, lighting and the like.

Table 3B applications and values have been determined by Committee BD-094 for use in applications that are not regulated by the NCC. It provides wet pendulum test or oil-wet inclining platform test classifications for applications where the NCC does not specifically require slip resistance. The applications listed are some of those for which slip resistance is warranted for reasons other than NCC compliance. The use of these values should be in the context of design, which also considers abnormal wear, maintenance, abnormal contamination, the presence (or otherwise) of water or other lubricants, the nature of the pedestrian traffic (including age, gait and crowding), the footwear (or lack thereof), slope, lighting and handrails.

NOTES TO TABLE 3B:

Further information can be provided by:

There are a number of different test methods recognised by the Australian Standard for slip resistance 4586:2013.  The most recognised is probably the ramp test with its R rating results – R9, R10 etc.

The Wet Pendulum Test is broadly being recognised as the most effective method, due mainly to the high likelihood of this test method being used to evaluate the suitability of a design selection after installation. The pendulum test is portable and therefore the test of choice for any forensic testing on site, which can be critical if there, has been a slip incident.

Standards Australia does publish slip resistance handbooks HB: 197 & HB: 198, to provide guidance as to how much slip resistance is a minimum requirement for various applications.  A design that does not comply with these handbook minimums will leave the parties involved vulnerable to a litigation should a slip incident occur. 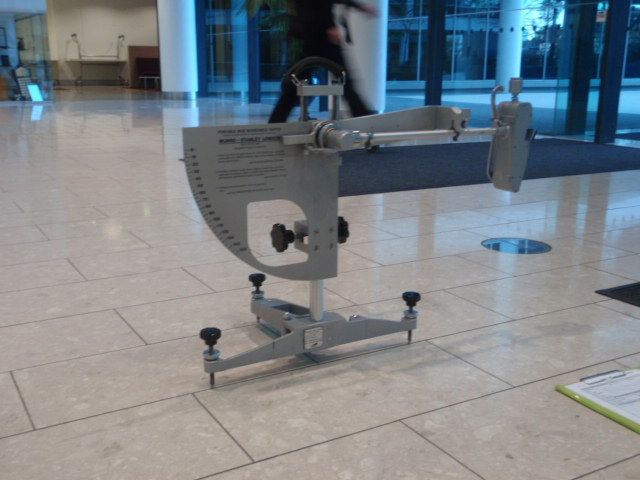 The pendulum test apparatus measures friction (CoF or Coefficient of Friction) and provides results as BPN (British Pendulum Number). The pendulum test is portable and therefore is frequently used on site as well as in laboratory conditions. It is one of the approved test methods under the Australian Standards AS4586:2013 & AS4663:2013

The test has a number of advantages over other test methods.

The results in BPN are grouped into categories of P0, P1, P2, P3, P4 and P5 (P5 is the highest). Pendulum tests carried out prior to July 2013 were done with a slightly different method of preparation and results were classified as (lowest) Z, Y, X, W, V (highest).  Tests provided under the previous method with Z – V results are still current, however they cannot be directly stated as equal to current P0 – P5 results. 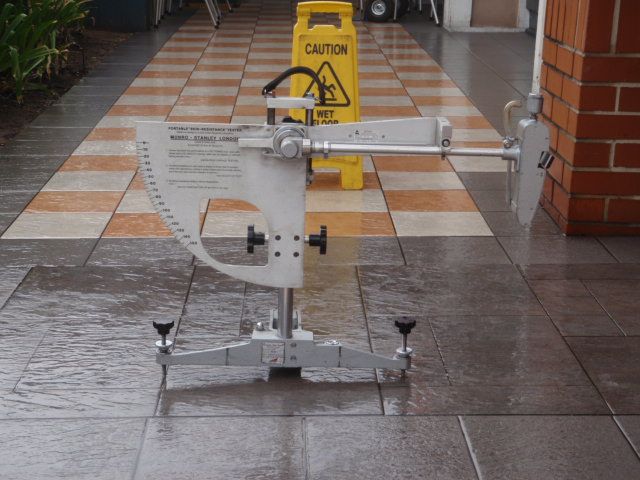 Wet barefoot ramp slip resistance testing is used for applications where it is expected that the majority of users will be in bare feet.  This test is carried out on the same ramp apparatus as the oil ramp test except the test panel has a stream of water (no oil) and with the test operator not wearing any shoes.

As with the oil-wet ramp test, the panel of the tiles to be tested are inclined to the point where the barefoot operator slips and the angle of the panel/ramp is measured.  The angle results are then classified as either A, B or C (highest).

Swimming pools, their surrounds and their amenities are by far the most common design applications where wet barefoot test results are considered.  – C rating is recommended for swimming pools. 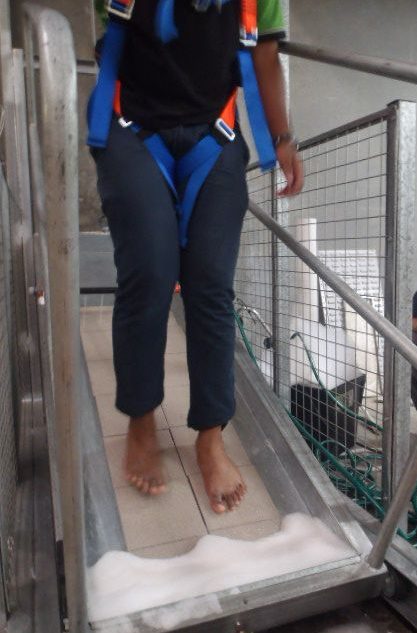 The Oil-wet Ramp Test (commonly referred to as the “Ramp Test”) provides scores that are widely recognised by most designers from their R – rating results:  R9, R10 etc.  The mechanism of achieving these results however is often poorly understood, as are the limitations of this test method.  There are very significant limitations to the ramp test and the creation of designs and specifications using ramp test results alone has lead to many problems for designers, their clients and indeed users and operators of facilities.

An investigation of slip resistance following an accident will almost certainly not involve the ramp test results, but rather will consider on-site pendulum testing.  It therefore follows that to design a floor without knowledge of the pendulum results of the floor surface selected is a significant risk.

A large part of recognising the ramp test’s limitations is obvious when the test method is explained: Approximately ½ a square meter of tiles to be tested is placed on a horizontal ramp panel, which is then inclined to the point where the test operator walking on it “slips”.  The steepness of the angle of the ramp panel is then measured and given a category rating from R9 to R13. 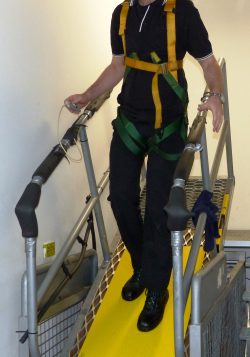 The following is a brief list of the limitations of the ramp test method:- 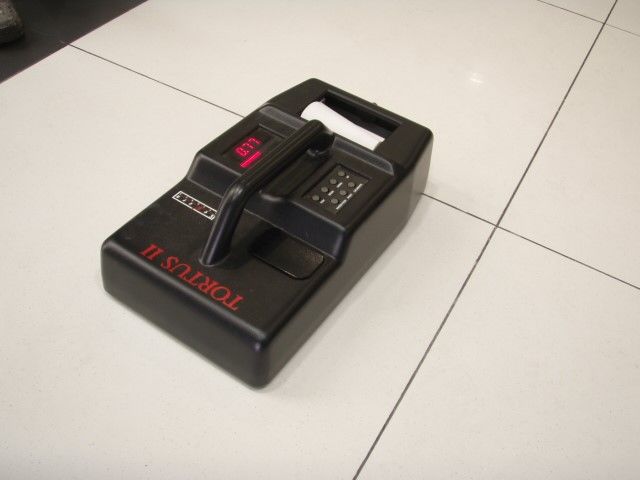 The Displacement Volume test essentially measures the surface profile amount of a ceramic tile or other flooring product. It is intended be an indicator for deliberately patterned products with raised dots, pyramids, squares, circles, ribs, ridges etc.  Flat textured surfaces will generally not achieve a result on this test however some extremely coarse textured surfaces of applied finishes may achieve a score in the lowest V4 category. 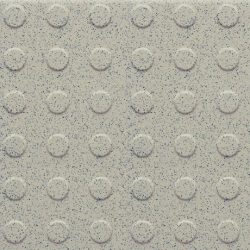 The limitations of profiled surfaces include:-

The 2013 version of the Australian Standard 4586, now recommends the application of wear to the items prior to slip resistance testing, where there is a requirement for long term durability of slip resistance.

AWT (Accelerated Wear Testing) provides an indication of how the slip resistance of an item will perform during long term use.  The most common wear application is 500 wear cycles (or scrubs) by the laboratory wear apparatus as shown. The application of 500 wear cycles is an excellent method of rejecting poorly performing products that loose too much of their initial slip resistance following installation and the initial handover period.

Application of 5,000 wear cycles is excellent for predicting which products will perform the best for the long term in heavy duty applications such as busy public access spaces for transport infrastructure, commercial buildings, shopping centres, sporting facilities etc

Following the application of wear, the item is then tested with the Pendulum as per the normal pendulum test method.  As the pendulum essentially measures the CoF (Coefficient Friction), these results can be correlated to what are considered known requirements of CoF for safe walking.  Most experts will agree that a floor measured with a reading of greater than 35 BPN (= 0.35 CoF) is inherently safe for normal pedestrian access. The minimum slip resistance recommendations found in Handbooks 197 & 198 recognise that all items lose some amount of slip resistance and take this into account in the recommended minimum.  Therefore a product that scores 35BPN out of the box is very likely to score much lower than this after use.

AWT is an excellent predictor of the real world floor slip resistance as the users will find it over the longer term. 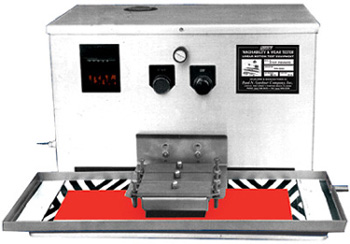 “Alstonville Tiles & Floorcoverings business is based on the development of long term customer relationships;  it is our hope that we may continue to provide you with quality products and service for many years to come.”

Read More About Us